Okay, first off, what in creation does that title mean?  Who edits this shit, e.e. cummings?

Anyway, my son Robbie and I have this little game.  We can never agree where to go to dinner – he finds my selections “de-class-ay”, whatever the crap that is, and I leave his places as hungry as I came, because I’ve been eating goddamn bird food all night.

So, we play a game where I pick the cuisine, and he picks the restaurant or vice versa.  It was my turn, so I said “pizza.  I want a goddamn proper pizza pie.”  So he picked Paulie Gee’s.

I did some research first…Paulie Gee, apparently, he used to be a…what, goddamnit…claims adjuster or something.  Anyway, he chucks it all aside and buys a pizza oven.  And as soon as I walked in, I could see why: so he could surround himself with a hot waitstaff!  My god, I felt like I was back in my room, spanking it to an issue of Cosmo.

Our waitress, a sweet little Oriental number, came by and we ordered wine.  Forget the wine, sweetie, want to be the next Mrs. Yutzi?  Ninth time’s the charm, you know.  But Robbie rolled his eyes and ordered some red…with bubbles!  I don’t get that boy sometimes.

I looked around, nothing but good-lookin’ dames carrying food, just the way Yutzi likes ’em.  “Hey, Robbie check out the talent in this joint” I said, but he was busy sniffing around the menu, finally squealing like a little girl with a box of shaved kittens.  I thought maybe bubbles from the wine shot in his nose.  “Dad, I’m getting the Grapeful Dead!”

I asked if that meant grape tomatoes, but he said no, there’s actual GRAPES on the goddamn pizza!  What’s this poncey hippy bullshit?  They gonna splash it with patchuli afterward?  I told him if he ordered that kind of flowery crap, he might as well deduct the price from his inheritance.  I just about smacked the black off of him.

Then I looked at the menu and saw the “Hellboy,” some pie with honey on it.  In fact, almost everything in this place had some kind of goofy name and, I don’t know, pimentos.  I couldn’t make heads or tails of it.  The waitress came back, and I just got a plain pie, and Robbie got “the Mootz” with sausage.   Sausage, now there’s something a REAL man puts in his mouth.  That’s my boy. 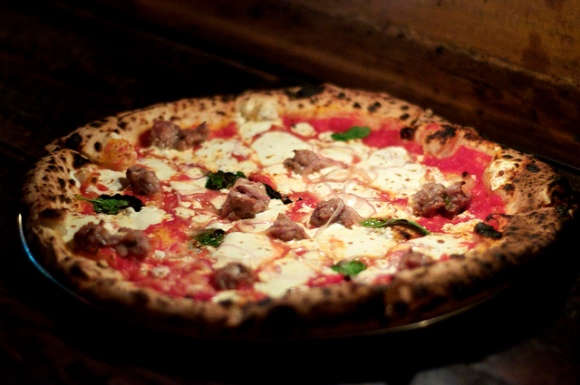 I must admit, the bubbling red wine went down pretty nice, and the environs…well, they were a little woodsy and modern, whatever happened to red tablecloths?  The waitresses more than made up for it, though.  Ay, chihuahua.

Oh, and Paulie came over and said hello!  Nice guy.  I asked him to turn down the music, but he misheard me and started showing me ticket stubs on his phone from all these rock concerts he used to go to in the ‘60s.  So I told him about the time Ann Murray played on the cruise ship, back when I was tending bar, but he didn’t seem too impressed. Yeesh.

Anyway, I’ve tugged on your coat long enough about this place…but I do have good news… the pizza is delicious!  Nice burnt crust you can tug at, bubbling cheese, hearty chunks of sausage…this is the kind of place you can take a dame to.  Or Robbie.

Wolf insisted I pick him up a pie if I liked the place.  Oh, waitress, one Grapeful Dead to go…and gimme your number while you’re at it.